Tandem Paragliding Experiences are one of the newest additions to our non-consumptive activities. If you’re like me, when Brian Greeson first asked about flying at The Ranch, I didn’t know the difference between paragliding, hang gliding, and parasailing. They are of course, quite distinct activities. Thankfully Brian and Lukas are eager to share what makes paragliding special.

After spending time around them, getting to go on my own tandem paragliding flight with Brian, and having fallen down the internet paragliding rabbit hole a few times now; I want to share some of the basics that I’ve learned so far about what paragliding. I’m still far from being an expert and I’m sure Brian and Lukas will be happy to answer any more technical questions you may have.

The Basics of Paragliding

One of the main reasons paragliding is great is because all of the equipment you need for it can fit into a backpack. Many paragliders are hiking enthusiasts and indeed, the hike can be as much a part of the sport as the flight itself. Because the gear is so compact and lightweight it is also easily checked on a plane so you can enjoy the sport and a unique way to see the world. Unlike hang gliders which need to be mounted on top of or towed behind a vehicle. Or parasailing which needs some sort of vehicle or propulsion means greater than just our own two feet.

Paragliding is a form of motorless flight initiated by jumping from or being lifted to a height. Once you take off, the air filling the inflatable wing is what allows you to gracefully descend from ridge top to valley floor. Or pilots use rising air columns and continue gaining elevation. You can use the elevation gains to glide from rising air column to rising air column and continue your flight over longer and longer distances depending on the weather and topography where you’re flying.

The “inflatable wing” used in paragliding is different than a parachute (which are used to slow descent such as in sky diving) mainly in its shape. Rather than being circular it is elongated and elliptical. A harness with straps around the shoulders, across the chest, and around each thigh suspends the pilot below the wing. Many pilots use a cocoon harness which they can slide over their legs after takeoff. Paragliding is considered an adventure or extreme sport, but when you see them reclining in one of these as they soar thousands of feet above the ground it looks more relaxing than a walk in the park. There is of course a lot of training that goes into becoming a pilot. Each of our pilots has done hundreds of solo and tandem flights. Paragliding is as safe, or in current times safer, than your daily commute in a car. Safe flying is important to our instructors not only for their personal well-being but for the well-being of the sport, which has grown exponentially over the last few years.

My Own First Tandem Flight Experience

Knowing how seriously they take their sport and how passionate they are about sharing it with others I didn’t have any qualms about flying with Brian. He hasn’t gotten to take me flying at The Ranch yet since we started this program, and with a decent amount of snow still on the ground, the conditions for getting up to the launch site aren’t ideal until a later in the spring. Instead, we went to a well-known and long—used paragliding launch site at Otto’s Ridge in Mack, CO near the Utah border.

Otto’s Ridge is a flat mesa with a cliff face only a couple of hundred feet high in the Western Colorado Desert. The only reason we went there instead of The Ranch is because it was still early enough in the season that the snow and mud made getting to the top of Cow Ridge impractical (though not impossible if you are ready to hike for it). Brian walked me through getting my harness on and the audible flight checks he does on each equipment is comforting when your brain starts going “wait what are we doing? Humans can’t fly”. And the comradery between he and Lukas, who was also flying that day, is fun and filled with light banter.

Once we’re buckled in and the wing is spread out and the checks are done it was time to launch. And basically, all you have to do for that is run over the top of the mesa until you’re airborne. It did give Brian & Lukas a laugh as they’re coaching me to run and all I can say is “my feet aren’t touching the ground, how do I run”?! AS soon as the wing lifted and inflated their wasn’t much I could do to make myself taller or heavier to match Brian. But I sure tried.

Once you’re in the air you just sit back in the harness which is designed to fit like a seat with bottom and back and take in the 360° views and blue skies. Even at The Ranch you’d be able to see over the invisible state border and to think of how incredible it is that we, humans, people, are doing something that historic figures like Leonardo DaVinci dreamt of doing is thrilling. That we can do it so safely and comfortably makes one really appreciate the benefits of living when we do. And I know those positives are something we could probably all use more reminders of these days.

Then comes the landing, which I’ll admit is the part I was slightly more nervous about. In reality, “gliding” really is the appropriate term as the wing keeps the impact light. You sort of skootch out of the harness from the sitting position and ready your legs to start walking again. The transition is less dramatic even than coming off of a boat. Another advantage of flying at The Ranch is we’ll have vehicles parked at the Landing Zone so we can just do the nice easy drive back to HQ for our next activity while at Otto’s we had a pretty good steep hike up that had me reflecting on just how much hiking I haven’t been doing over the winter.

Flying on The High Lonesome Ranch

After getting to fly there and knowing what the launch will be like on top of Cow Ridge, I’m really excited for my tandem experience at The Ranch. One big difference is that you launch off a slope so that some of that work is done for you. And I know the views and entire experience of flying over The High Lonesome Ranch is going to be even more breathtaking. And of course, who wouldn’t want to feel like James Bond launching from the top of the mountain and gliding down to breakfast or a picnic lunch at your cabin?!

To get to the launch site, you’ll drive up the Dry Fork Valley and stick to the right at the “Y”. Make sure you buckle up for the road beyond the HLR gate up Cow Mountain or opt for the paraglider’s tradition of hiking up to the launch site. You may want to stop (and catch your breath) frequently as you take in a taste of the views to be seen from the air, and as you climb in elevation thousands of feet from valley floor to the top of the mesa.

The rocky faces you see as you ascend are the very reason The High Lonesome Ranch is home to such spectacular flying. Whether winds hitting the cliff faces and slopes create lift. Those same rocky outcroppings create the perfect setting for temperature variations as the earth warms unevenly across the surface causing thermal columns to rise.

An easy way to “see” these is to watch birds as they circle or glide in their flight. If you want to look more into bird patterns and populations and the heating earth check out why our Regenerative Ranching practices are so important and why we’re thrilled to be Audubon Certified for our Conservation Ranching methods.

If you’re already an experienced pilot, make sure you check out the High Lonesome Fly-In event in September or reach out to Brian and Lukas on Telegram if you’re curious about flying on the Western Slope. 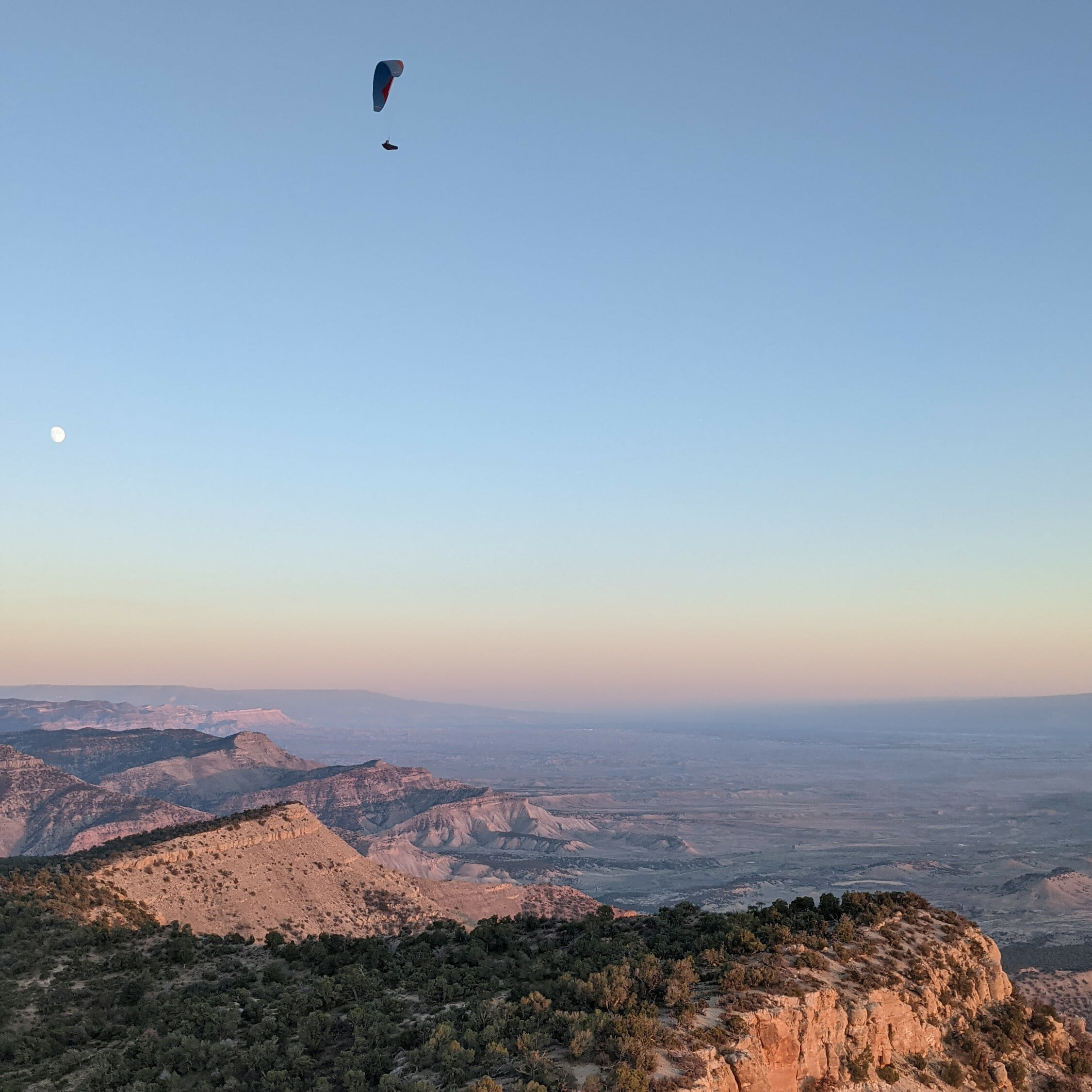 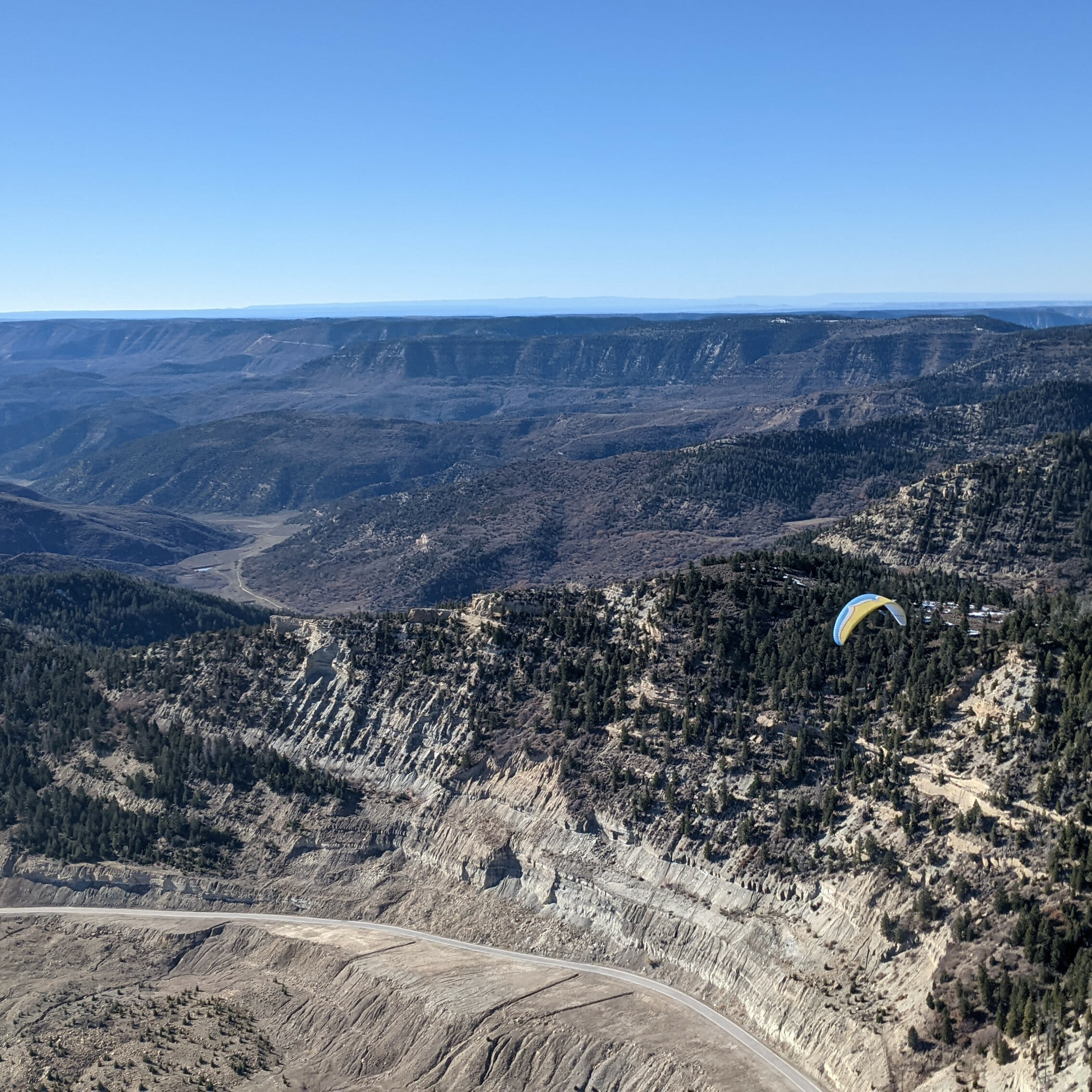 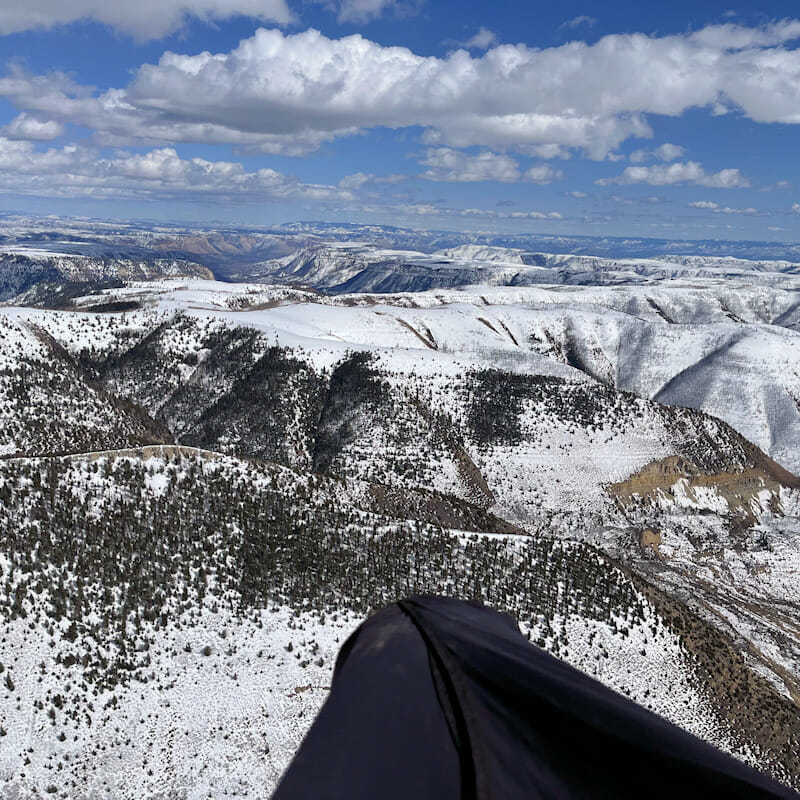 Get Ranch news and updates.

Sign up for our emails for $25 OFF your first order. Be the first to hear about limited weekly specials, flash sales, and holiday discounts!